A Garden to Sing About

Exploring the life and mixed-fortunes of a Hampshire country-house garden and how an Opera-loving Australian came to its rescue. 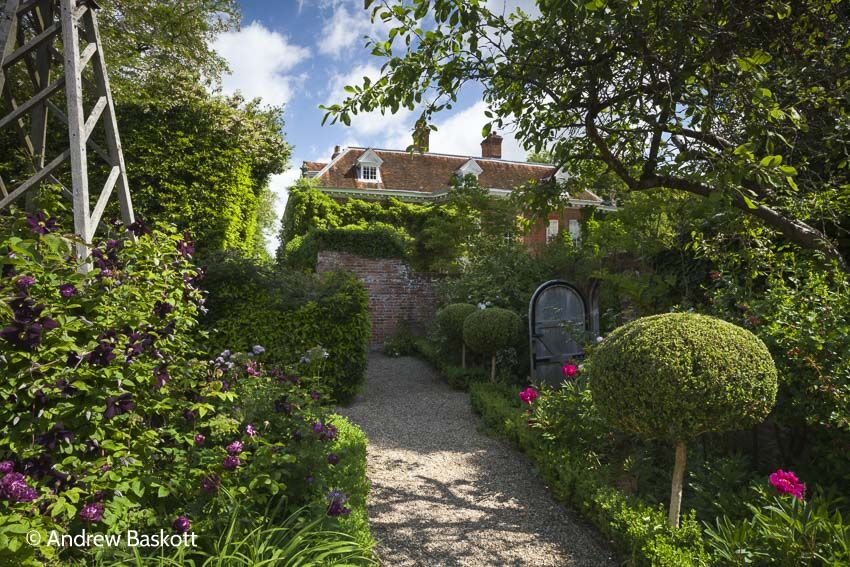 Lieutenant General Henry Hawley wasn't a well-liked man. In fact, many feared and loathed him, the result of his chilling and ruthless reputation earned during the 1745 Rebellion. He wasn't called 'Hangman Hawley' for nothing.

Despite Hawley's notoriety, the one redeeming feature of his life was possibly the building of West Green House. Built around 1720, this elegantly proportioned manor house in the typical early 18th-century style of red brick and tile roof stands tucked away amongst the green folds of north Hampshire near the village of Hartley Wintney, not far from Hook.

Hawley's descendants were to live there until 1898, after which the Playfair family became the new owners. Dr Playfair was the Royal physician, and he commissioned renowned Scottish architect, Robert Weir-Schultz to redesign the north front of the house and transform the gardens.

However, the Playfair family didn't stay long, and for much of the 20th-century, West Green was the home of Evelyn, Dowager Duchess of Wellington and her younger cousin, Yvonne Fitzroy. The house was actually bought for Evelyn by Sir Victor Sassoon, and it was Sir Victor who left West Green to the National Trust in 1957. Although it only fully became a Trust property in 1971 following Yvonne's death.

A TARGET FOR TERRORISTS

The National Trust's very first tenant was Lord Alistair McAlpine. In keeping with his family's construction heritage, Lord McAlpine embarked on a mini-building spree within the gardens. With designs by architect Quinlan Terry, he set about creating an eclectic mix of garden follies and neo-classical ornaments. One impressive piece is the Nymphaeum fountain, forming part of an Italianate garden entered through an earlier Victorian moon gate, which also frames the garden's steps and rill.

As treasurer to the Conservative party, he was a prominent figure within political circles. However, this prominence also made him a terrorist target. And became a reality in 1990. His tenancy at West Green had almost ended when the IRA detonated a large bomb on the house's forecourt close to The Mews. Fortunately, no one was hurt but the damage was so extensive the National Trust seriously considered demolishing the whole house.

THE SAVIOUR FROM DOWN UNDER

In the end, they decided to repair the fabric of the Grade II-listed house and look for someone else willing to tackle the interior and restore the gardens. And so, in 1993, it was Marylyn Abbott who made the brave decision to purchase the 99-year lease and take on the challenge of West Green House. The fact she was living in southern Australia at the time wasn't going to deter her at all.

Having already created one of Australia's most visited gardens at Kennerton Green in Mittagong, New South Wales, Marylyn now headed to England in search of a new garden in a kinder climate.

What she really wanted was 'somewhere old and in need of a bit of love' and, perhaps most importantly, a garden in which to grow a 'proper herbaceous border'. Her search had ended at West Green House, and it would certainly need all the love it could get.

Over the years, the garden had gradually slipped into a state of neglect and become lost beneath a tangle of brambles and ivy. The lake now resembled a marshy swamp and The Mews still looked like a bomb site. Marylyn quickly realised it wasn't just a lot of love the garden would need, but money too!

A CELEBRATION OF FLORA AND MUSIC

Marylyn had once worked for the Sydney Opera House and had a passion for music and opera. Now, with 10 acres to play with, she could see that West Green presented an opportunity where both her passions - gardens and music - could be indulged.

Using Robert Weir-Schultz's design framework as a starting point, restoration of the garden began in earnest. Most of the follies by Quinlan Terry were rebuilt, and it took four years of soil improvement before anything could be planted. The walled garden was one of the first projects. Here they planted box hedging, only to see all 75,000 plants succumbing to box blight. The whole area was replanted, this time with standard box plants they had grown from cuttings and seemed immune to blight.

During all this hard work and frustration, Marylyn was still running her garden in Mittagong – albeit through a lot of late-night phone calls. Her nocturnal garden management finally ended in 2007 when she sold the gardens at Kennerton Green.

Gradually, the sounds of music began to reverberate across the garden. To the west of the house is an enclosed terraced lawn and it was here, with its theatrical setting and natural acoustics, the first classical concert was held. Perhaps unsurprisingly, it had an antipodean flavour led by the Australian Chamber Orchestra. Since then the Theatre Lawn, as it's now called, has seen the addition of a stylish glass-sided auditorium and hosts various opera and classical music performances during the summer. West Green even boasts its own orchestra.

In time, The Mews area was restored and so too the lake. No longer resembling a marshy swamp, the Lake Field has become the idyllic setting for torch-lit picnics before musical performances, with the island and its decorative wrought-iron pavilion linked by a gently arched wooden bridge the lake's centrepiece.

A traditional style still flourishes at West Green House, such as the Alice Garden's chessboard parterre, or the walled garden with its gravel paths edged with box and topiary spheres. The herbaceous borders are planted with old-fashioned roses and there's a potager too, where fruit, flowers and vegetables grow in harmony.

More contemporary designs can be found in the Paradise Garden, with its fountains and interlocking pools. While the Dragon Garden, with two brightly painted Chinese dragons and oriental-style pagodas, provides some distinctive architectural interest.

The gardens have seen many changes over recent decades - some almost as dramatic as one or two of the operas it stages. But without Marylyn's passion and perseverance, West Green wouldn't be what it is today: a garden very much worth singing about.

Another article in the series was An Ever-Changing Masterpiece.